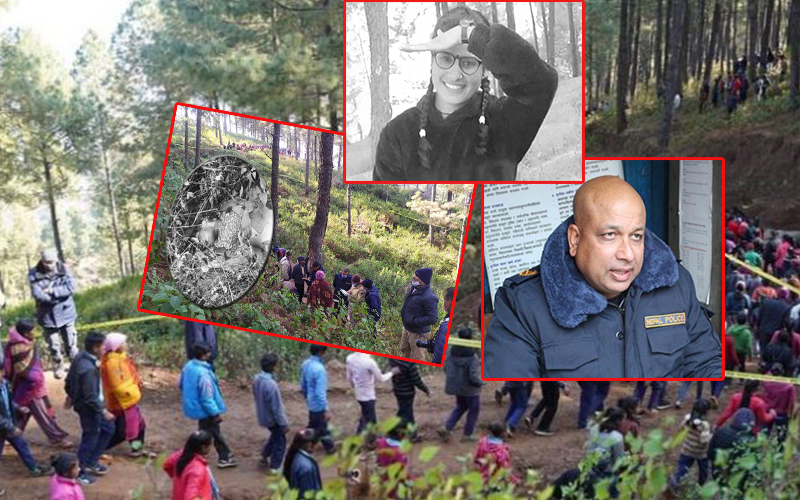 KATHMANDU: Police have arrested a man in connection with the rape and murder of 17-year-old Bhagarathi Bhatta of Chadepani in Dogadakedar village municipality-7 of Baitadi district. Sources said that a suspect was arrested by the police from Mahendranagar while he was fleeing to India. The suspects were not arrested today.  He was arrested last Saturday. The police team arrested the suspect on Saturday night while he was on his way to India via Mahendranagar in Kanchanpur. Police have not released any information about the man, saying it would not affect the investigation.

The man arrested from Mahendranagar has been kept under high surveillance by the police. The postmortem report of the district hospital Baitadi had confirmed that Bhagarathi was strangled to death after being raped. The phone he used was also found on some of his body and his call details (log) were deleted. The battery of the mobile phone was found by the police near the house of the person.

After the rape and murder of Bhagarathi, it rained on the night of the murder and the dog followed the criminal’s footsteps for a while but got confused on the road. But he was referring to the Khochalek market.

It has also been revealed that the arrested person is a person holding public office.

Hundreds of police have been deployed at the spot. Police are very restrained in this case as the murder case after the rape of Nirmala Pant of Bhim Dutt in Kanchanpur two years ago has not been solved. The police officer refuses to say anything in this regard. As the incident is being investigated, the police have been very restrained this time by measuring the difficulty that may be caused by the information coming from the media. Police, who are investigating the incident, said that some suspects have been kept in a ‘close ring’ and the culprits will be made public soon. “We are close to the culprit,” the official said. The investigation is ongoing. There is not much to talk about. Wait a while and we will bring out all the facts. ‘

Bhagarathi Bhatt, a 12th class student of Commerce at the local Sanatam Dharma Higher Secondary School, has been raped and murdered today (Tuesday).

Meanwhile,  police are conducting a search operation in Lovelake forest and are conducting cross-verification with evidence by placing four suspects in a ‘close ring’. Police have mobilized more than 10 teams from village to village for the investigation. Bhagarathi was raped and killed in the local Lovelake forest on January 6 while returning home from school. After the daughter did not return home till evening, her mother Draupadi searched the village and relatives. Bhatt’s family found his body in the Banamara bush about 70 meters below the Lovelake forest road, according to a report by Bhagarathi’s friends at around 5 pm on Thursday. We saw the deforestation of the forest. We found out that Bhagarathi was missing. We have informed the parents after seeing Bhagarathi’s body. ” Friends who found his body had given a statement to the police.

After that, the police had been waiting for Bhagarathi’s body on Thursday night.

Bhagarathi’s body was recovered after the Central Investigation Bureau (CIB) and doctors collected evidence from various angles. After that, she was sent to Baitadi District Hospital for postmortem. But his body is still in the district hospital. The family has taken a stand not to understand the body until the culprit is found. After the post-mortem report confirmed that Bhagarathi was killed after being raped, there have been protests not only in the district but across the country. Police are under intense pressure to find the culprit.

The police are restrained
There was some difficulty in the investigation as it was raining on the night of the rape and murder of a teenage girl on January 7 (Thursday). But the police have shown great restraint in this incident from the very beginning. The dog of the police had found the normal keypad of the deceased Bhagarathi not far from the mobile body. The battery of Bhagarathi’s mobile phone was found near the house of a government official. After committing the crime, the path used by the person was stopped after a walking dog. The police dog had pointed towards Khochlek Bazaar (which is also the center of the village) near the incident site. There are now more than a hundred policemen stationed in that market. Far-Western Police Chief Uttam Subedi himself has been investigating the incident since Friday. DIG Subedi himself went to the field with his career at stake Is conducting a meticulous study, police said. Despite such activism of the police, the culprit has not been identified. But the police are determined not to make the same mistake as in the Nirmala case.

Due to some clues found in the
incident, evidence found at the scene, information obtained, evidence, materials found, etc., it is suspected that a local person was involved in the incident.

Crime
Scene :  About half an hour’s walk from the local Sanatam Dharma Higher Secondary School, Khochalek, where Bhagarathi is read, can be reached from the market site by taking a steep road from the newly dug unpaved road. Underneath the thin pine tree is Vanmara and other small shrubs and Sallebhir – around the scene. The postmortem report of the district hospital confirmed that she was strangled to death after being raped. His body was found about 70 meters from the main road in a hollowed-out area of ​​the forest. Her bag was also found along with it.

Looking at the nature of the scene, it is seen that Bhagarathi tried to flee downhill when someone tried to force him. Because part of her hair was found about 15 meters from the road. Along with the hair, a ‘rubber band’ was also found. Some of her hair has fallen out on the street. According to the police, Bhagarathi had tried to escape from the road but was unsuccessful. The perpetrator dragged her from there and killed her after raping her about 70 meters down. This is what the police investigation has shown. Answering many questions we had with the police as to whether it was a gang rape, a police source said that only after looking at the report of ‘Vaginal Swab’, which is an important link in the police investigation, can one be sure that one person or another was involved in the incident.

According to the police, the chances of a new criminal coming to the scene are very low. Therefore, the police claim that the culprit involved in the incident may have already been hiding in the road and the target may have been ‘targeted’. Police suspect that when the criminal saw Bhagarathi alone, he walked with Bhagarathi for some time and reached a secluded place (in the forest). Therefore, the police suspect that there may be a person who knows the criminal Bhagarathi closely involved in the incident.

After parting from friends, Bhagarathi was walking home alone through the forest. He bought noodles at Khochlek Bazaar (in a statement to the police, one of them saw Bhagarathi eating noodles). After walking uphill from the market, a man followed her on the way to the middle of the forest and immediately strangled her to death for fear that the incident would become public. However, the victim could not resist.

Police are searching for the pedestrian
who was walking on the road from Khochlek, the center of Dogadakedar village, to the house of the deceased girl on that day (Wednesday, January 7). Police have found a man who had seen Bhagarathi from Kholchek Bazaar to a place called Silla. I saw Bhagarthi eating noodles. Eyewitnesses have told the police. After walking up the forest road from the market, you reach the hill. Bhagarathi’s house is reached by crossing the hilly dirt road dug a few years ago.

Had a conversation with the perpetrator?
Bhagarathi to the criminal and Bhagarathi to the criminal? In response to this question, the police said, “The possibility of Bhagarathi having a conversation with the criminal is very low.” Bhagarathi’s Call Details Report (CDR) does not show any recent conversation between Bhagarathi and the culprit. The Ncell and NTC mobiles used by Bhagarathi were not found talking to anyone on the day of the incident. This is a report from Digital Forensics Lab. But this method is being studied in many ways and methods. ” Police said that further investigation is underway into the Indian SIM card used by Bhagarathi. Police said that the person involved in the crime should be very clever as he was found throwing the battery from his mobile phone.

Bhagarathi’S Family
Bhagarathi’s father (Krishnananda Bhatt, 50), who was suffering from a long illness, had died a month and a half ago. Draupadi, dressed in white, is in a state of shock. Draupadi, who is mourning the death of her husband, has been shocked by the murder of her 17-year-old daughter after raping her. It was a betrayal to get a government job. Sadly, she went away to study. The deranged Draupadi said to the media.

Bhagarathi’s two sisters are already married. His brother (Keshav Raj Bhatt) had gone to India for employment. He has come home after the incident. Brothers and sisters who were left in charge of the family have returned home after the tragic incident. He talks to people who come to visit him but his mind is not stable. Keshav Raj has not been able to look at his mother’s face. Keshav Raj suspects that the incident may have been caused by an acquaintance of Bhagarathi who was living with her single mother.

There is silence in Chadepani village despite the presence of neighbors, relatives, friends, local people’s representatives, administrative persons, leaders / activists of political parties, media persons and human rights activists to offer condolences to the bereaved Bhatt family. The school children are scared.

The family is in excruciating pain as the culprit has not been identified for two weeks. However, the family of Bhagarathi, who saw the activism of the police, is confident that the culprits will be caught as much as possible.