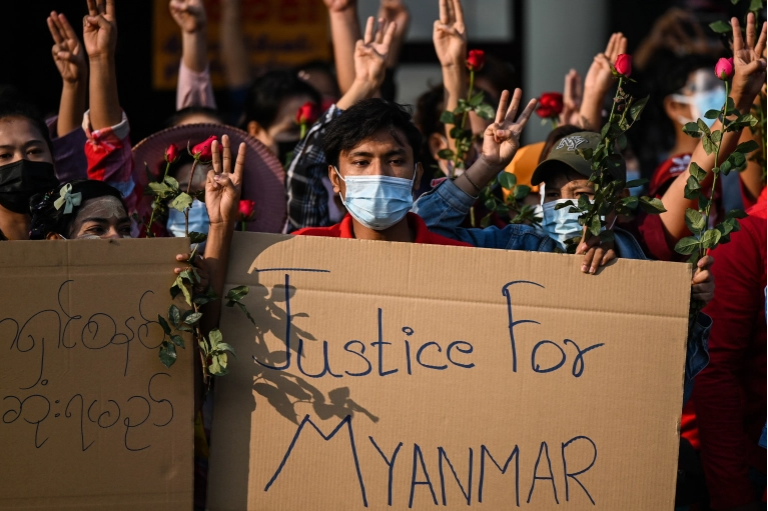 They walked in the bright sunshine down the middle of the road, waving NLD flags and making the three-figure salute that has become a symbol of protest against the February 1 coup. Drivers honked their horns and passengers held up photos of Aung San Suu Kyi.

“We will move forward and keep demanding until we get democracy. Down with the military dictatorship,” protester Myo Win, 37, told AFP news agency.

The scenes, broadcast on Facebook, were some of the few that have come out of the country since Myanmar’s military authorities shut down the internet and restricted phone lines on Saturday.

Netblocks, a UK-based service that tracks internet disruptions, said “a near-total internet shutdown” was in effect in Myanmar by Saturday afternoon, with connectivity falling to just 16 percent of normal levels.

The broad outage followed a military order on Friday to block Twitter and Instagram after authorities said some people were trying to use the platforms to spread “fake news”. Facebook had already been blocked earlier in the week – though not fully.

The communication blackout has lent greater urgency to efforts to resist the coup. Saturday saw the largest protests to date, with tens of thousands coming out in cities across the country to condemn the coup that brought a 10-year experiment with democracy to a crashing halt.

Similar-sized demonstrations took place in at least two other parts of the city. At Yangon’s City Hall, protesters presented flowers to police, some of whom carried assault rifles.