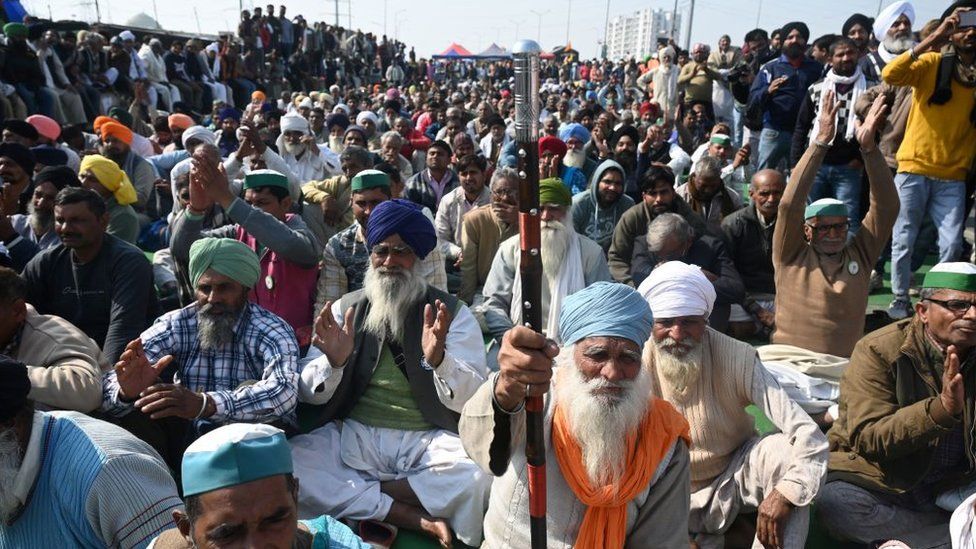 Kathmandu : India has suspended mobile internet services in three areas around the capital, Delhi, where farmers are staging a hunger strike in protest at new agriculture laws.

The government said the shutdown would continue until Sunday night to “maintain public safety”.

Tens of thousands of protesting farmers have been camped out on Delhi’s outskirts for more than a month.

Talks between unions and the government have failed to break the deadlock.

The protest made international headlines on Tuesday when a tractor rally ended in violent clashes that left one protester dead and dozens of police officers injured. Some demonstrators stormed Delhi’s historic Red Fort and occupied it until police pushed them back.

Internet services had been suspended at Singhu, Ghazipur and Tikri – the districts where farmers have gathered – until 23:00 (17:30 GMT) on Sunday.

Farmers’ leaders said Saturday’s one-day hunger strike had been timed to coincide with the anniversary of the death of independence leader Mahatma Gandhi.

“The farmers’ movement was peaceful and will be peaceful,” said union leader Darshan Pal.

Protesters themselves reacted angrily to the internet shutdown, Reuters reported. One farmer, Sandee Sharma, accused officials of trying to “create a panic” while another, Bhavesh Yadav, said it was “killing democracy.

The government action comes amid rising tensions at the locations where farmers are based.

On Friday, clashes broke out at Singhu when a group of unidentified men approached farmers and reportedly told them to leave.

Farmers say the men threw stones at them and destroyed tents. Several injuries were reported. Indian media said the men were local residents who accused the protesters of disturbing the peace and damaging the local economy.