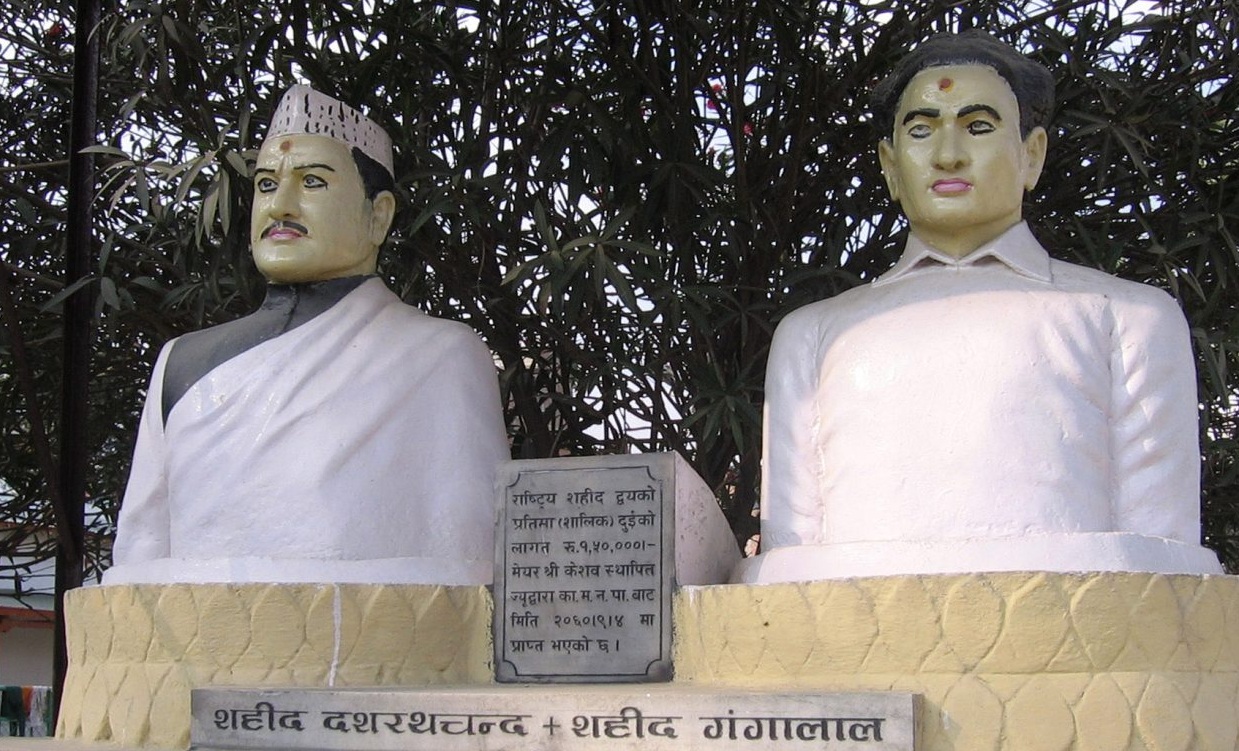 Kathmandu : Tribute has been paid to martyrs Gangalal Shrestha and Dasharath Chand today under the Martyrs’ Week Programme by garlanding their life-size statues.

At a tribute-paying programme organised by Kathmandu Metropolitan City, the statues of the two martyrs were garlanded.

The KMC had built their full-size statues at Shovabhagawati, where they attained martyrdom.

On the occasion, KMC Mayor Bidya Sundar Shakya said that contribution of martyrs sacrificing their lives for the establishment of democracy could not be compared with anyone.

Similarly, Chairperson of KMC-15 and Spokesperson of KMC, Ishworman Dangol, pointed out the need of changing the existing thinking to fulfil martyr’s dream.

Death penalty was given to Shrestha and Chand at Shovabhagawati on Magh 15, 1997BS on the charge of carrying out seditious activities and inciting people against the Rana regime for establishing democracy.

Born in Baitadi district in the far-west of the country, Chand had actively participated in the satyagraha, the non-violence movement initiated by mahatma Gandhi in India. Shrestha was born at Bhangeri of Ramechhap district in central part of the country.

He was involved in the movement against the then Rana regime while a college student. He had been studying at Trichandra College in Kathmandu at that time.

Like in previous years, KMC has been marking the Martyrs’ Week from January 23 to 29 this year by organising various commemorative programmes.

It has already organised separate programmes in memory of martyrs Shukra Raj Shastri and Dharma Bhakta Mathema before this.

KMC has been observing the Martyrs’ Week since 2012 BS. It has installed life-size statues of the four great martyrs who attained martyrdom in course of the movement waged in 1997 BS for overthrowing the Rana oligarchy and establishing democracy.

The statues are installed at the various places in Kathmandu where they got martyrdom.

A meeting of the Council of Ministers constituted the committee on January 24. Minister for Foreign Affairs Pradeep Kumar Gyawali is the coordinator of this committee while Minister for Water Supply and Sanitation Mani Chandra Thapa and the Minister for Land Management, Cooperative and Poverty Alleviation, Dr Shiva Maya Tumbahangphe are the members.