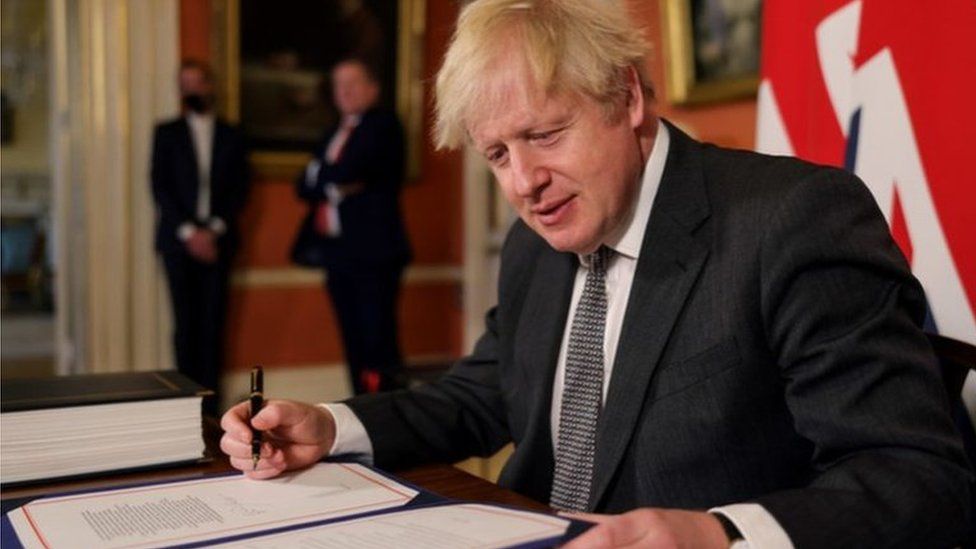 Kathmandu : The post-Brexit trade deal between the UK and EU takes effect at 23:00 GMT on Thursday, after it was signed into law.

Parliament overwhelmingly backed the agreement in a high-speed process on Wednesday, following the two sides reaching agreement on Christmas Eve.

It takes the UK out of the EU’s single market and customs union, but ends the possibility of tariffs on goods.

PM Boris Johnson thanked MPs and said: “The destiny of this great country now resides firmly in our hands.”

Opponents say the country will still be worse off than it was while in the EU.

Brexit happened on 31 January, but the UK has continued to follow Brussels’ trade rules until now.

The deal – reached just before the deadline to do so – sets out a new business and security relationship, following the severing of these ties.

It comes four-and-a-half years after the UK voted to leave the EU in a referendum.

The EU (Future Relationship) Bill, bringing the trade deal into UK law, was backed in its first parliamentary stage in the House of Commons by 521 to 73 votes on Wednesday, after Parliament was recalled from its Christmas break.

The House of Lords later passed it at third reading – its final stage – without a vote and the Queen – who is spending the festive period at Windsor Castle rather than Sandringham because of the coronavirus pandemic – gave the final approval, Royal Assent.

In an interview with the BBC’s Laura Kuenssberg, Prime Minister Boris Johnson said the deal would allow the UK to “go our own way but also have free trade” with the EU.

Most Labour MPs voted in favour after leader Sir Keir Starmer said a “thin deal was better than no deal”.

But all other opposition parties, including the SNP, the Lib Dems, Plaid Cymru and all Northern Ireland parties that take seats at Westminster, opposed the bill.

It will come into force at 23:00 on Thursday, but although the European Parliament has begun its scrutiny of the 1,246-page document, it will not get a chance to ratify it formally until early in the new year.

The deal has, however, been given the unanimous backing of ambassadors from the 27 nations and the member states gave their written approval on Tuesday.