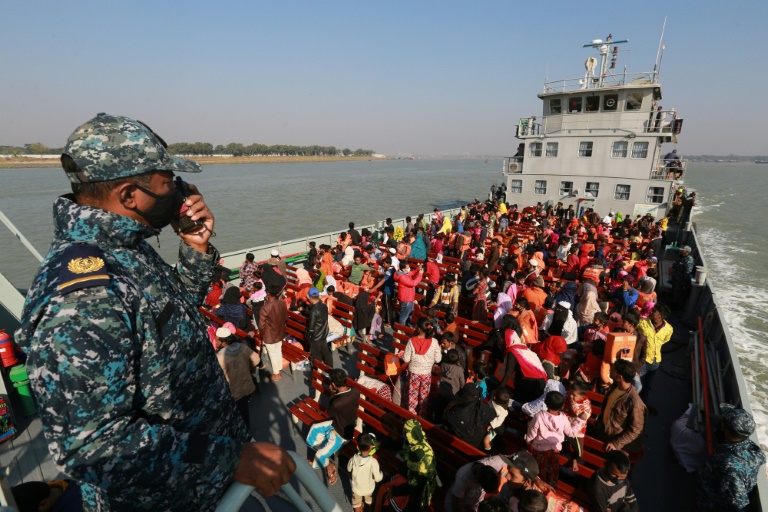 Kathmandu : Four Bangladesh navy ships on Tuesday took the second and biggest group of Rohingya Muslims yet from crowded refugee camps to an uncertain future on a bleak island three hours from the mainland.

The government insisted that the 1,800 refugees, who have been in camps since fleeing a Myanmar military clampdown, want to start new lives on Bhashan Char, where 1,600 others arrived earlier this month.

But rights activists expressed new doubts about the transfers. They said some Rohingya had their shanty homes in the camps on the Myanmar border padlocked so they had no choice.

The Bangladesh government eventually wants to rehouse 100,000 of the camps’ approximately one million Rohingya on the island, which takes the full force of cyclones that roar across the Bay of Bengal each year.

The Rohingya carried bags of belongings, toys and chickens and took selfies with each other as they sat on wooden benches during the three hour trip from Chittagong to Bhashan Char.

Housing blocks have been set up for the new arrivals on the island that foreign minister A.K. Abdul Momen has called a “beautiful resort”.

More than 700,000 Rohingya joined 300,000 already in camps in Bangladesh in 2017 after a deadly purge on their villages in Myanmar that the United Nations has said could be genocide.

With Bangladesh now struggling to find a long-term solution to the Rohingya exodus, government refugee officials said there were better living facilities and better security for the Rohingya in Bhashan Char. “They are very eager to go to Bhashan Char because they have heard from their relatives, those who have gone to Bhashan Char, that it is an excellent place,” Momen told AFP.

Grandmother Morium Khatun, 55, said she was making the change to escape drug-related crime in the camps that has seen dozens killed in recent years. “I am looking for peace of mind. The refugee camp is not a place for that,” she said.
But an international rights worker who interviewed some Rohingya said they had no choice about the move.

“The homes of some of the refugees were padlocked by volunteers working for the Bangladesh camp authorities to force them to agree to the relocation,” the worker told AFP, speaking on condition of anonymity. “They are told that if they don’t go, their homes will remain padlocked.”

“Allegations from within the community about cash incentives being offered to Rohingya families to relocate to Bhashan Char as well as use of intimidation tactics are making the relocation process questionable,” said Amnesty International’s South Asia campaigner Saad Hammadi.

A Rohingya journalist who took photos of refugees boarding buses for the relocation was detained on Monday, a local rights activist said. Police told AFP they were not aware of an arrest.

After the first transfer on December 4, several Rohingya told AFP that they were beaten and intimidated to agree to move. The UN said it has not been involved in the process.