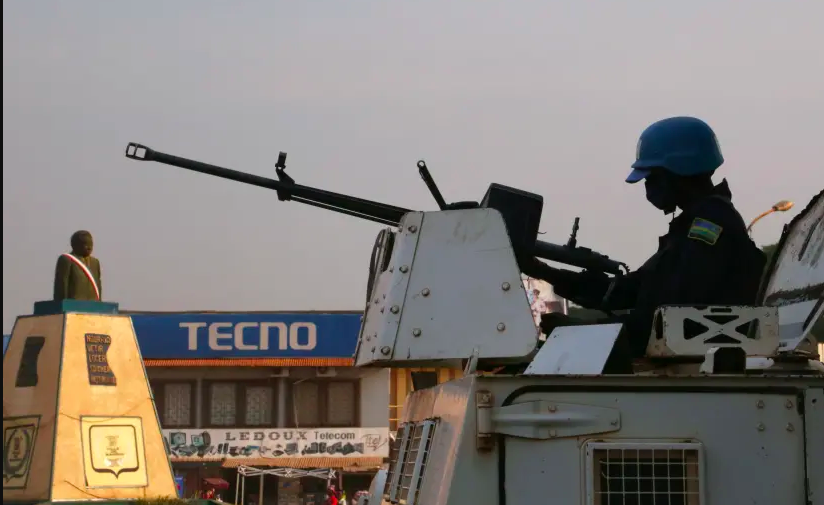 Kathmandu : Voters went to the polls on Sunday in the Central African Republic in presidential and legislative elections marred by the latest flare-up in a long-running civil war, with many unable to cast their ballots.

Incumbent Faustin Archange Touadera is the frontrunner in polls that follow a week of turbulence marked by accusations of an attempted coup, rebels briefly seizing the fourth-largest town and Russia and Rwanda dispatching military personnel to help the beleaguered government.

UN peacekeepers and local and Rwandan soldiers were patrolling the streets of the capital on Sunday with armoured vehicles posted outside polling stations.

Although some stations opened late in Bangui because of a lack of voting materials, senior election officials told AFP they would stay open later to make up for it.

“It’s very important for me to be here, as a citizen. I think this vote will change our country, whoever the president will be,” teacher Hortense Reine said.

Polling stations began to close at 5:00 pm (1600 GMT) with partial results expected on January 4 and the final totals on January 19.

At the end of the day, government spokesman Ange Maxime Kazagui praised “the commitment and determination of the population who defied the armed groups”.

And Momokoama Theophile of the National Elections Authority (ANE) told AFP that turnout had been good “despite minor security concerns in some places”.
A runoff will be held on February 14 if there is no overall majority in the first round.

In the northwest, more than 500 kilometres (300 miles) from the capital, rebels seized election materials in Koui and officials received death threats in Ngaoundaye, according to a senior UN official.

In some areas, rebels threatened anyone who went to vote.
The CSSE Strategic Committee for Securing Elections, which is close to the government, listed at least 12 provincial sub-prefectures where voting could not take place.

Meanwhile, thousands of people had not received their voter cards because of the dire security situation, according to local and UN officials who all requested anonymity.

“How do we vote when we don’t even have our voter cards,” Robert, from Boali, 80 kilometres north of Bangui, told AFP by phone — explosions audible in the background.
“Everyone is fleeing at the moment. I’m holed up at home.”

Ahead of the elections many of the 1,500 candidates contesting the 140 seats in the national assembly were unable to campaign.

Former president Francois Bozize, who wanted to stand but was barred by judges because he is under UN sanctions, urged people not to vote and backed a rebel coalition.
“Stay at home. Let Touadera place his ballot in the box alone,” Bozize said in an audio message published online which his party confirmed to AFP.

Fears about the rebels swept the city in the following days, although the UN peacekeeping force MINUSCA said their advance had been stopped.

The rebel coalition on Wednesday announced a 72-hour “unilateral ceasefire” in the runup to the vote, only to call it off on Friday saying it would resume its march on the capital.

On Sunday, polling stations in Bambari remained closed in the morning because of gunfire from armed groups, according to Jeannot Nguernendji, president of the local peace committee.

Even though bloodshed has receded in intensity over the last two years, violence remains chronic. Militia groups hold sway over two-thirds of the territory.

Experts and opposition figures have already asked what legitimacy the president and 140 MPs to be elected will have, given the obstacles to voting in many areas outside the capital.

“There is the soothing speech that says that everything is going well in Bangui and we forget everything else,” said Roland Marchal of the International Research Centre at Sciences Po in Paris. “The armed groups have taken the population hostage.”