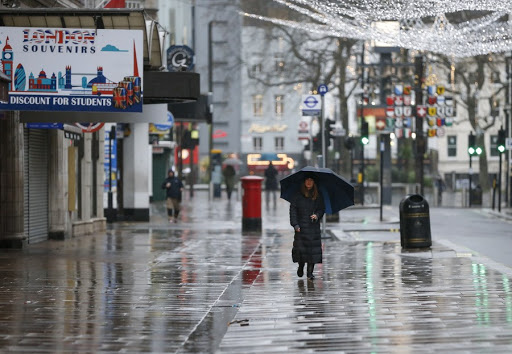 (Xinhua) — British Health Secretary Matt Hancock on Wednesday announced that more areas of the East and South East of England will be put into Tier Four restrictions, the highest level, while revealing that two cases of another new variant of the novel coronavirus have been identified in Britain.

To curb the spread of COVID-19, Sussex, Oxfordshire, Suffolk, Norfolk, Cambridgeshire, parts of Essex that are not currently in the tightest restrictions, Waverley in Surrey and Hampshire will all enter Tier Four from Boxing Day, Hancock said at a virtual press conference at Downing Street.

Bristol, Gloucestershire, Somerset, Swindon, the Isle of Wight, the New Forest and Northamptonshire, as well as Cheshire and Warrington, will enter Tier Three, he said.

Under the new tougher measures, residents in Tier Four areas must stay at home, with limited exemptions. People are also urged to work from home when they can, and should not enter or leave those areas. Meanwhile, Hancock also said that another new variant of the novel coronavirus has been detected in Britain, and two cases have been reported so far.
“Both are contacts of cases who have travelled from South Africa over the past few weeks,” said Hancock.

This new variant is “yet more transmissible” and the development is “highly concerning”, he said. Cases and close contacts of cases found in Britain are being quarantined, and the British government is placing “immediate restrictions” on travel from South Africa, according to Hancock.

Experts are still learning about this new variant, and “we are pretty confident that the system we have in place will help control the spread”, Sky News quoted Dr Susan Hopkins, from Public Health England, as saying.

The press conference was held after British ministers met on Wednesday morning to hammer out plans to combat a rising number of infections in the country.

Meanwhile, Hancock said that the government is expanding community testing yet further in areas where the rate of infection is highest.

“So we can identify people, and especially to identify the around one in three people, who carry the virus without displaying any symptoms at all,” he said.

Another 39,237 people in Britain have tested positive for COVID-19, the highest daily increase since the start of the pandemic in the country, bringing the total number of coronavirus cases in the UK to 2,149,551, the official data showed Wednesday.

The total number of coronavirus-related deaths in Britain now stands at 69,051, the data said. To bring life back to normal, countries such as Britain, China, Germany, Russia and the United States are racing against time to develop coronavirus vaccines. Enditem