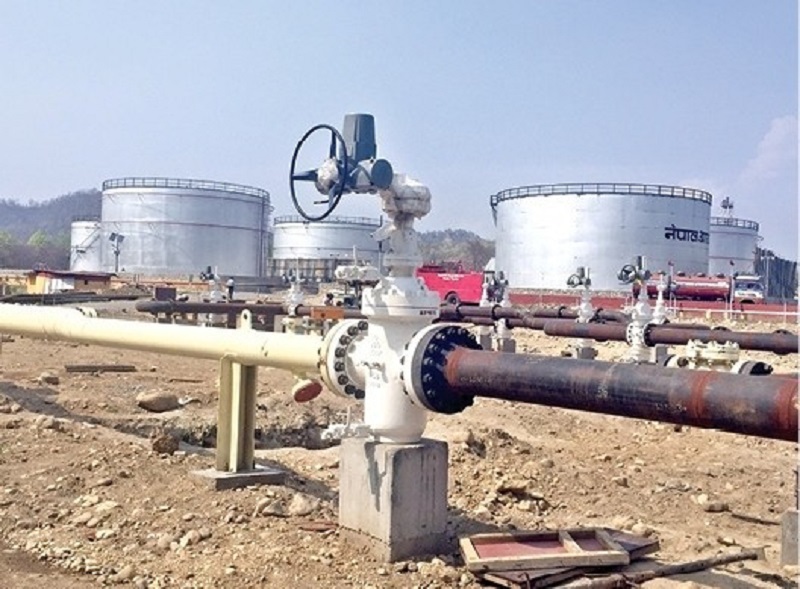 NOC has stated that 534.1 million liters of diesel is imported annually from the 69.2 km long pipeline from Motihari in India to Amalekhgunj in Nepal. The pipeline was able to earn a profit of 80 crore in the first year since its establishment. The project was jointly inaugurated by Prime Minister K.P Sharma Oli and Indian Prime Minister Narendra Modi, last year on 10th September.

The history of the first ever motor vehicle in Nepal dates back to 1901 A.D, petroleum was also imported from the same period. It was not till long ago, petroleum was carried to Nepal in bottles, canisters and drums .The demand of fuel was catered through Petrol Pumps which were opened at Tripureswor and Kalimati which used to import fuel in association with Indian companies through tankers.

Nepal Oil Corporation was established in Jan 10, 1970,  It was after that, the demand and supply of fuel was regulated in a systemized way. Later on, import through private sector was banned and Nepal Oil Corporation directed the flow of petroleum through its fleet of tankers. At present, this has shifted to pipeline transfer which is termed as paradigm shift. Termed as the dream project of the Rt. Honorable Prime Minister of Nepal, K.P.Sharma Oli and Rt. Honorable Prime Minister of India, Narendra Modi, this is also the first cross-border pipeline of South Asia. Completed and operational in a short time-span of 15 months, this Motihari – Amlekhgunj Pipeline Project is also the first Mega Project of Nepal to be completed in time.

The pipeline dream & its beginning

The pipeline dream was envisioned 30 years back when Nepal Oil Corporation received a document relating to the feasibility of Petroleum Pipeline Project in Nepal from South Asia Regional Initiative for Energy Integration, USAID. The feasibility report made upon request from NOC highlighted the economic and technical advantages of the project. It is in light of the same report, Nepal & India signed the petroleum pipeline MOU in G2G Model. The MOU was signed back then by the Honarable Minister of Commerce & Supplies of Government of Nepal Mr. Sunil Bahadur Thapa and Honorable Minister of Petroleum and Natural Gas of the Government of India Mr. Dharmendra Pradhan. As per statistics, Nepal imports Fuel worth NRs. 200 billion per year. In the project estimated to be of worth NRs. 4.2 billion, Nepal committed to invest NRs.1.2 billion and India committed to invest the remaining 3 billion Rupees

Small protests & arguments on the pipeline project started to be heard from inside NOC itself as it was a time when imports were flowing smoothly through tankers. Nepal Transport Organization also started protest stating that they would lose their livelihoods if the import starts from pipeline.Even the earlier challenges were solved through dialogues & negotiations, the challenge was not limited to this. Deep concerns were there regarding to the successful and timely completion of the project. As earlier there were many Indian invested unfinished Mega projects with a not so good reputation.

The project was sure to be completed in time as it was not just a mega project, it was a project of pride for the Government of Nepal, Government of India, Nepal Oil Corporation, Indian Oil Corporation and the Indian Embassy in Nepal.In May,1990 the then Managing Director of NOC Mr. Dipak Thapa had initiated for the feasibility report of the pipeline project. in the year 1995, the Indian Oil Corporation forwarded the Cross Border Pipeline Project Proposal. A junior level MOU was signed between NOC & IOC in 1996.NOC & IOC also signed a company level MOU in 2004. The DFR for the project was made in 2009. In 2015, G2G level MOU was signed and the first meeting was held between NOC & IOC, and from 7th of April,2018 the works for pipeline started.The announcement of the successful completion of the project was done in June 18, 2019. And in the same day, for the first time diesel was sent to the Amlekhgunj Depo, Nepal from Motihari Depo, India.

For now, the pipeline has delivered diesel only.

The province number 3, 4 & 5 consumes the biggest share of fuel imported in Nepal. It is said that 60 % of total fuel import to Nepal is consumed in these three states. Diesel is consumed the most in Nepal.

Because of the high demand of Diesel due to its essentiality in transport and construction, only diesel will be imported through the pipeline project.

With the replacement of the diesel transporting tankers by pipeline, there will be decrease in expenses of the NOC. The pipeline is estimated to save the NOC NRs. 2 billion per year. Alongside this the MRP of diesel has also decreased by 1.5 Rs. Per liter.

There are some technical reasons for the Motihari Amlekhgunj Pipeline to be seen as an important project because of its various features. Being the first cross border pipeline project is one of the main.

The other reason is it being the shortest cross country pipeline of the world. The third is that this pipeline can import the most quantity of petroleum in the shortest distance. Apart from this it has many other economical and engineering features.

The total length of the pipeline is 69.9 km. 36.2 km lies in Nepal whereas 33.7 km lies in the Indian side. The outer diameter of the pipe in the Nepal side is 10.75 inch whereas the outer diameter of the pipe in the Indian side is 12 inch.Even though the full capacity of the pipeline is 295 Kiloliter per hour, currently only 250 Kilotere per hour diesel is being imported at the first phase.If run on full capacity, this project can import 2 million tons of Petroleum, daily  3500 liters of diesel only is being imported due to less storage capacity with the NOC. However 80 % of total diesel to be consumed in Nepal will be imported from the pipeline. The payback time of this 4 billion Rupees. Project is only 2 years and the MOU has a life of 15 years.

Even though the storage capacity increment was announced years ago, 4 new tankers have been added in the Amlekhgunj Depo only after the pipeline project was confirmed. Along with this Amlekhgunj Depo has 12 vertical and 4 underground tanks.

That is why for the first time in Nepal, a Mega project invested by India completed successfully in time. The pipeline project has defined itself as a healthy milestone in the definition of Nepal India relations.