Kathmandu August 9 : The General Manager of Turkish Airlines for Nepal Abdullah Tuncer Kececi has found doing party when he arrive in kathmandu, which is against the according health protocol enforced by the government of Nepal .

On Thursday General Manager Kececi has arrived Kathmandu from the capital of Turkey.

He was found at Hotel Mariot on the next day of arrival (Friday) with nine people doing party.

According to the health protocol enforced by the government of Nepal operating hotels are allowed even though holding parties and banquets is strictly prohibited.

In the past week number of corona Paitents were increasing in Kathmandu rapidly. 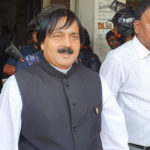