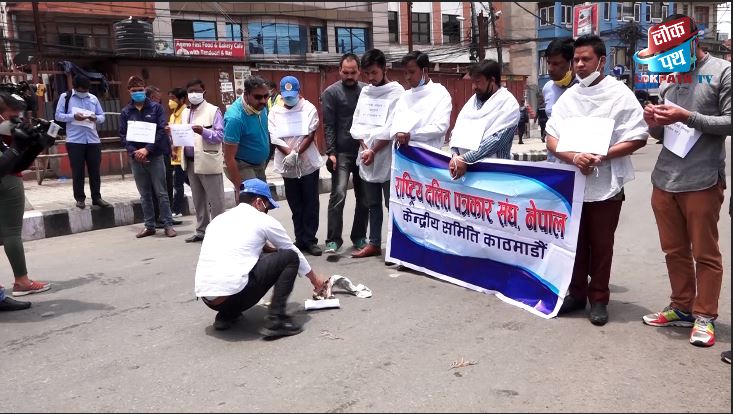 The National Dalit Journalists Association has launched a nationwide protest against the Rukum Paschim incident where five youths have been confirmed dead while one still missing after an attack on a group of youth over inter-caste marriage bid on May 23.

Three persons including Nawaraj BK were killed and three other made disappear after they were attacked over the attempt of inter-caste marriage between Nawaraj BK from Bheri Municipality-4 of Jajarkot and a Malla lady from Chaurajahari Municipality-8 of Rukum Paschim. The lifeless bodies of five youths, including Nawaraj, BK have been recovered from Bheri River while one youth has gone missing till date.

Calling for an impartial probe into the incident, the Association also demanded justice to the victims’ families as well as due relief. The umbrella organization of journalists from Dalit community, in its protest conducted a candlelight vigil where the protestors wrapped themselves in white clothes as a symbolic protest against the carnage.

Protests were held simultaneously in 63 other districts including Butwal, Kapilvastu and Surkhet districts. Federation of Nepalis Journalists (FNJ) General-Secretary Ramesh Bista demanded stern action against the perpetrators in the Rukum Paschim scourge. Urging one and all not to politicize the caste-based violence, he spoke of the need for the government to uphold zero-tolerance policy against the caste-based discrimination and untouchability.

Association’s Vice-President Gopal Baraili along with other Dalit and non-Dalit journalists convened today at Maitighar Mandala in Kathmandu pressed the government for stern action against the perpetrator.