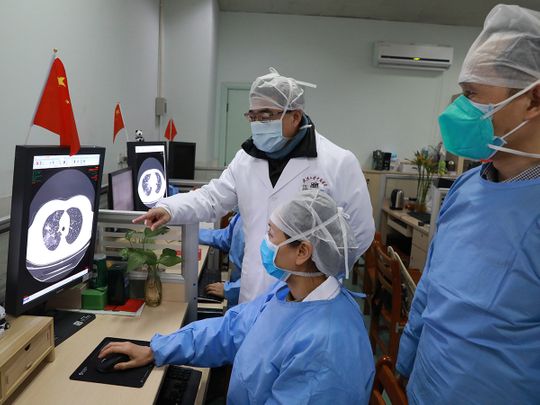 Of the new patients, 447 were residents in Daegu, about 300 km southeast of the capital Seoul, and 64 came from its surrounding North Gyeongsang province. The total number of infections in Daegu and North Gyeongsang province increased to 1,579 and 409 respectively. The virus infection soared in recent days, with 1,735 new cases reported on Feb. 19-27. The country raised its four-tier virus alert to the highest “red” level on Sunday. Daegu became the epicenter of the viral spread here as the biggest cluster of mass infections was found in the city with a 2.4 million population.

The cluster was linked to the church services of a homegrown minor religious sect, called Sincheonji, in Daegu. As of Friday morning, 840 cases were tied to the worship services. A total of 117 cases were traced to Daenam Hospital in Cheongdo county, just south of Daegu. Test for all of about 650 patients and medical staff was completed as almost all of the patients at the hospital’s psychiatric ward tested positive for the virus. The cluster infection at the hospital was believed to have been linked to the Sincheonji sect as a number of followers attended a funeral ceremony for a brother of the Sincehonji founder. The government designated Daegu and Cheongdo as a “special care zone” last week. The health authorities completed testing about 1,300 Sincheonji followers of the Daegu branch, and the test results would be announced until this weekend. The government secured the entire list of some 310,000 Sincheonji followers on Thursday.

One-third of the followers was reached and checked, and 1,638 who showed symptoms across the country were placed under self-quarantine. Since Jan. 3, the country has tested more than 81,000 people, among whom 48,593 tested negative for the COVID-19 virus and 30,237 were being checked. One more patient was discharged from quarantine after making full recovery, lifting the total number of those discharged to 27.