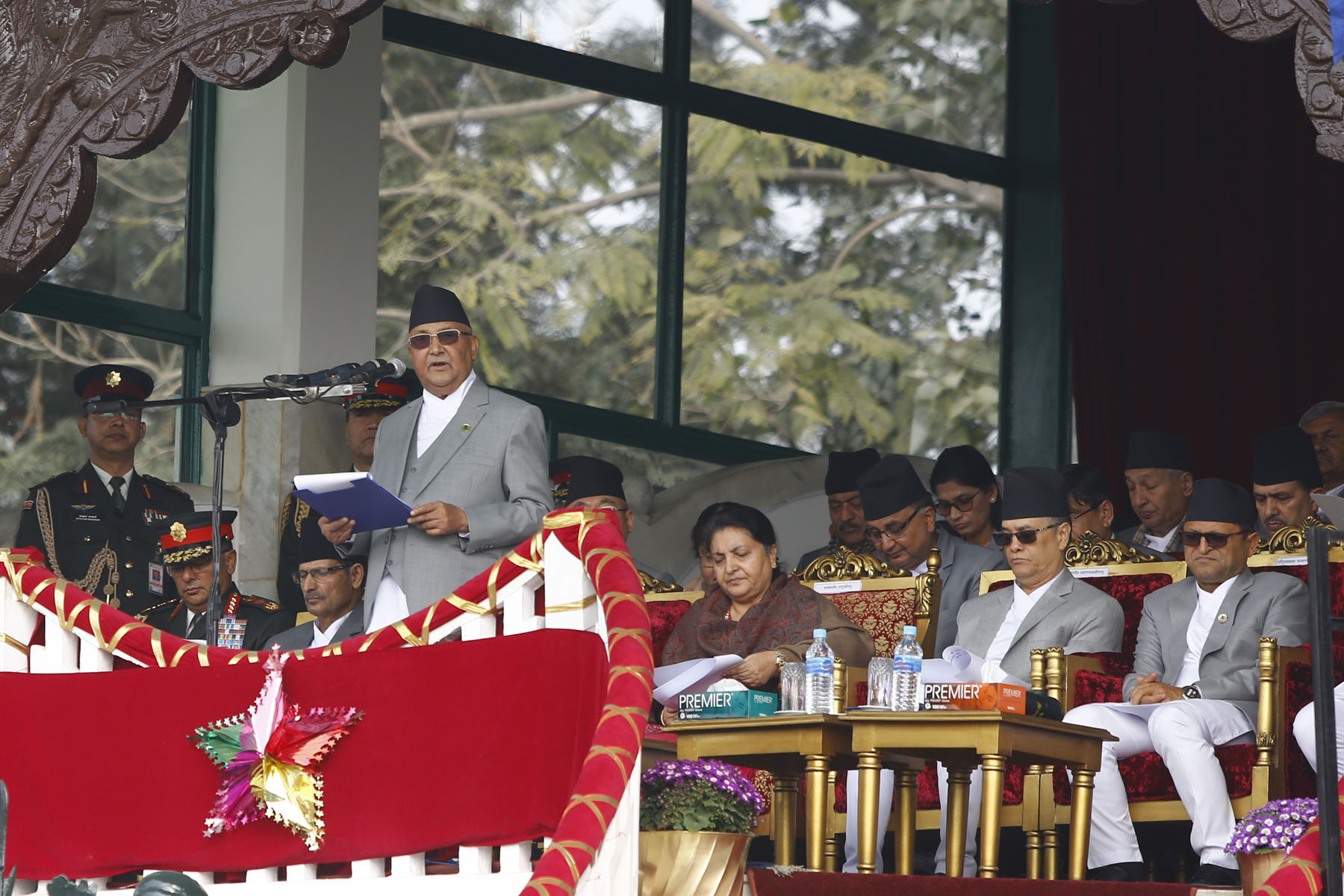 Prime Minister KP Sharma Oli has expressed commitment to continue with a journey for a prosperous Nepal by overcoming hurdles created against such mission.

Complaining of obstructions in the mega campaign for pursuing prosperity in the country, he made it clear that such unwanted circumstances would not be allowed block the journey towards a special destination. In his address to a special programme organised at the Army Pavilion Tundikhel on the occasion of the 70th National Democracy Day today, the Prime Minister said, “The government is determined to overcome intentional barriers created against the journey of development.” Though we have to go a long way to see richness in the nation, a journey towards that end continues, according to the Prime Minister. He added the government was aware of that mentality which considered this mission unessential and meaningless. Recalling the moment when the government formed in the aftermath of the general election held after the constitution’s promulgation completed its two years recently, Prime Minister Oli said the government took its first year as the base year for the state operation.

“Now the government is moving ahead by developing state structures as demanded by the constitution, implementing federalism and carrying out fiscal management and adjustment of laws and workforce. We are committed to building a prosperous Nepal on these bases. Results have started to be seen in terms of good governance and development. ” Describing Fagun 7 (7th in the Nepali month of Fagun) in 2007 BS as a glorious day marking the commencement of a new era, he said the Democracy Day was being celebrated every year in commemoration of that historic moment. On the occasion, the Prime Minister extended Democracy Day best wishes to all Nepalis at home and abroad.

He cherished today as the day when the society, politics and government system was freed from an autocratic oligarchy and a point when a beautiful dawn had come about by removing a long period of darkness. In the present times, the country has moved out of poverty to prosperity, from underdevelopment to development and from mismanagement to well-managed state. The seed of this campaign of the state had been sown 70 years ago. The PM called on the masses to rise up from the formality to safeguard the dignity that had been achieved between 70 years back and now. Remembering the brave martyrs who sacrificed their life in the relentless struggle in the past for democracy and for securing the democratic rights, the Prime Minister stressed that no one should forget the glorious history of the past democratic movements.

“Today is the day for resolving to the prosperity of the nation as desired by the people,” PM Oli exhorted. According to him, the country has now moved ahead towards economic development and social transformation as the nation has managed to end the decade-long conflict by adopting home-grown solution. “Nepal has been identified in the world as the country that can solve its problems on its own. Nepal has expanded its identity in the international arena and Nepal has drawn world’s attention,” PM Oli said adding that the country has now proceeded towards enhancing its prestige through the exercise of democratic rights and making the people’s desire for prosperity successful. Stating that we have been practicing a new state structure, a new dispensation and a new constitution in a changed context, he said the situation however was not easy as replacing one government with the other.

PM Oli said the challenge was there at present of addressing in a short period the people’s aspirations that have been there since long. In this context, there is the need of institutionalising the present system and taking forward the march towards prosperity. He reiterated on the need of assessing the dissatisfaction coming from several sides, the systemic change, people’s aspirations and the institutional needs of the state during the time of prosperity campaign. Stating that present time is an era of development and prosperity, PM Oli said the government’s responsibility is to banish unemployment and backward situation although the country has reached thus far by defeating autocratic and authoritarian regimes. “The government has moved ahead with plans to enter development era. We have been on the path to strengthening and expanding democracy at people’s reach alongside economic development and social justice,” he said. The government has set goals to upgrade Nepal from least developed country by 2022 and achieve sustainable development goals by 2030, he said.

Saying the government was focused on implementing its responsibility of economic and social transformation, he also expected the cooperation of neighbouring countries in the campaign of pursuing prosperity. PM Oli also stressed the need for coming generations to study and internalise long struggles and history episodes that had taken place for democracy and nation building.

On the occasion, a contingent of Nepal Army presented a guard of honour to President Bidya Devi Bhandari and cultural processions of various communities were also displayed. In attendance on the occasion were Chief Justice Cholendra Shamsher JBR, Speaker Agni Prasad Sapkota, Chairperson of the National Assembly Ganesh Prasad Timilsina, ministers, heads of constitutional bodies and senior employees of the government. 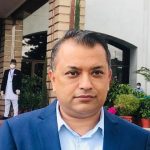