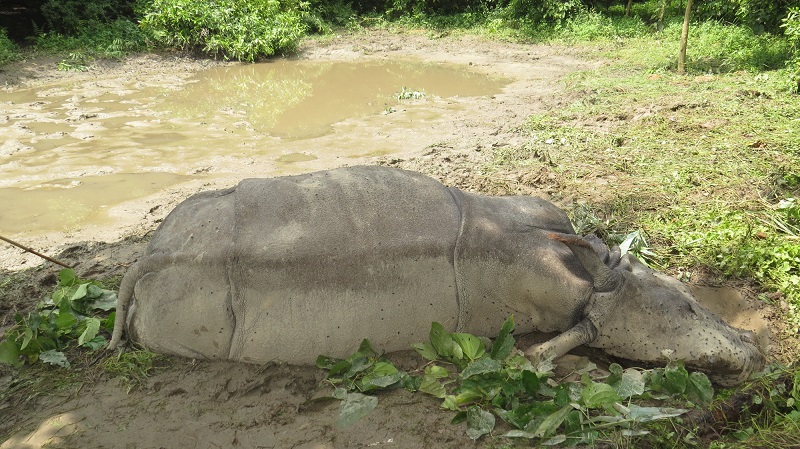 Three rhinoceros died after the consumption of poisonous food in the past one month in the Chitwan National Park (CNP). The preliminary report shows that a rhino which was found dead last Saturday at Seheri, East Nawalparasi had died as the animal happened to consume toxic food.

According to CNP senior veterinary doctor Dr Bijay Shrestha, a rhino had succumbed to poisonous food at Tamaspur area last week, which was preceded by the one death at Ganjipur area a month ago. The female rhino which had died last week was ten-month-old pregnant. The post-mortem reports on the dead bodies of the animals read they suffered intestine and stomach bleeding. “We are in search of a laboratory to find out the nature of poison and to be more specific and clear about the death cause,” he said, adding, “We have the specimen of the dead rhinos for the laboratory test.” ‘Mustard substances’ were found in the stomach of all three rhinos and it is also estimated that they might have died after eating poisonous mustard seeds and plants, he further shared.

However, the laboratory test was waited to be confirmed about the real cause. Of the three rhinos, that which was found dead at Seheri was male and remaining others were female. The rhino census at CNP is conducted every five years. According to the latest census, the number of this herbivorous animal was 605 and the new census is taking place this year.